Today Dr. Karl Bell has posted an very interesting article entitled Spring-heeled Jack: The Terror of Victorian England over on the #FolkloreThursday website.

This reminded me of my own small Spring Heeled Jack piece, originally from my book 800 Years of Haunted Liverpool, later published in Fortean Times #238 in 2008. I thought I may as well post it here for Folklore Thursday interest.

I should say that Jack’s visit to Liverpool was investigated by none other than the Great Detective himself, Mr. Sherlock Holmes, in our 2012/2013 Dynamite Entertainment series The Liverpool Demon. 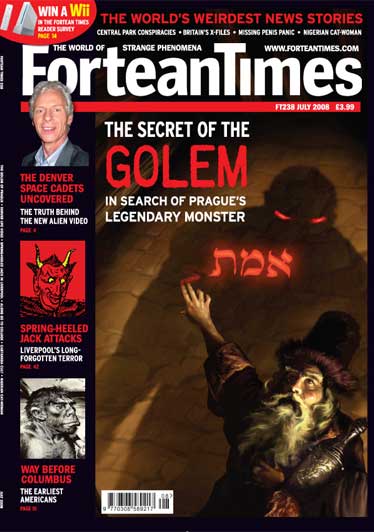 The entity we now call Spring Heeled Jack first made its self known late in the summer of 1837 when a curious shape changing creature – reported variously as an imp, a white bull, a ghost, an armour clad man and a bear – terrorised the satellite villages of the capital. By January 1838, these reports had grown so numerous that the then Lord Mayor of London, Sir John Cowan, convinced that pranksters where to blame, vowed that those responsible would be caught and punished. London was in the grip of a sort of mass hysteria with the thing – now christened Spring Heeled Jack because of the immense leaps it seemed capable of – being sighted all over the city, yet somehow always evading capture.

It was at the height of this panic, on the evening of the 20th of February 1838 that an eighteen year old girl by the name of Jane Alsop was startled by a furious knocking at the door of her family home in the district of Bow. Jane answered the door to an excited gentleman who claimed to be a police officer. He breathlessly informed the young lady that he believed he had successfully apprehended non-other than Spring Heeled Jack himself and implored her to fetch a lamp. When Ms. Alsop returned however, the lamp’s light revealed the caller’s peculiar attire “he was wearing a kind of helmet, and a tight fitting white costume like an oilskin. His face was hideous; his eyes were like balls of fire. His hands had claws of some metallic substance”.i The man attacked Jane, tearing at her clothes with his talon-like hands but vanished into the night when, alerted by her screams of terror, members of her family came to her assistance. In a statement given to the Lambeth police Jane swore that the caller had “vomited blue and white flames” during the assault. Only five days later another eighteen year old girl, this time named Lucy Scales was walking with her sister on their way home from visiting their brother. As the women travelled along the thoroughfare known as Green Dragon Alley a figure sprang from the shadows and attacked Lucy, apparently breathing fire into her face. The assailant then strolled calmly away as Lucy’s sister tried desperately to tend to her sibling, calling out for help from anyone who might hear. Lucy was rendered insensible by the attack and fell into violent spasms which lasted several hours.

These reports and others like them cemented Jack’s reputation as a kind of fiendish cultural icon for the new Victorian age, a position which he held up until his more vicious namesake Jack the Ripper began his reign of terror. Penny Dreadfuls, the day’s version of pulp fiction magazines, telling of the phantom’s exploits were published and plays bearing his name were staged in many of the city’s fleapit theatres. Soon however, the attacks became less frequent and slowly but surely Spring Heeled Jack faded from real life terror to urban myth. Over the next few decades periodic sightings of the entity came from as far afield as Sheffield, Northampton and Lincolnshire. On one occasion he was even shot by a soldier when he appeared at an army barracks in Aldershot, the bullets apparently having no adverse effect.

It was in 1888 that Jack made his first appearance in Liverpool; members of Everton’s Saint Francis Xavier’s Boys’ Guild were passing an evening playing games in the school room when a frightened lad rushed in and announced that the creature had been sighted on nearby Shaw Street. The boys rushed outside in search of old Jack but found nothing although, it is alleged that a crowd of people had gathered outside Saint Francis Xavier’s church, claiming that the thing was clinging to its steepleii.

Some sixteen years after his first visit, it seems that Spring Heeled Jack decided to drop in on the citizens of Everton for a second time. Or did he? On the 21st of September 1904 an article ran in the Liverpool Echo under the heading An Everton Ghost Story.

“Considerable commotion was caused yesterday in William Henry-street, Everton, on a rumour that a sort of “spring-heel Jack” was pursuing his antics in that neighbourhood. The story, as it was passed from mouth to mouth, reached sensational dimensions. It referred chiefly to the annoyance of the inmates of a certain house by means of various missiles being thrown in a mysterious manner and without any visible agency. The annoyance is said to have been so great that the tenants left the house to-day, but the police have been unable to find any ground for the suggestion that a “ghost” was at work, and believe some foolish person has been playing pranks.”

Three days later, the Echo reported the case of a boy who had been arrested for breaking the window of the residence in question.

“[…] the people of the neighbourhood had for some reason voted the house haunted. Several hundreds of the denizens yesterday swarmed about it and the prisoner determined upon the self-imposed task of interviewing the ghost. He climbed the back wall and entered the house, having to break a pane of glass to unfasten the window-catch. Great excitement prevailed among the juveniles in the crowd as to the fate of [Hugh] Morgan, but in the midst of it a constable arrived and arrested him for breaking the window, which proved a humiliating discounting of the youth’s heroism.”

Presently, the local press seemed to lose their interest in the curious events of William Henry Street. This was not the case elsewhere in the country however; the spirit of Spring Heeled Jack had been invoked and, in the South of the country, his was still not a name to be spoken lightly. On the 24th of September in a short piece about the incident, the London Star reported that

“Lurid stories of the doings of the notorious Spring Heeled Jack who some years ago frightened half the women and children of the city were recalled by present scenes”. The following day, evidently heeding the old adage that the facts should never be allowed to get in the way of a good story, the News of the World printed an article entitled Spring Heel Jack – Ghost With a Weakness for Ladies.

“Everton (Liverpool) is scared by the singular antics of a ghost, to whom the name of ‘Spring Heel Jack’ has been given, because of the facility with which he has escaped, by huge springs, all attempts of his would-be captors to arrest him. William Henry-street is the scene of his exploits, and crowds of people assemble nightly to see them, but only a few have done so yet and, ‘Jack’ is evidently shy. He is said to pay particular attention to ladies. So far the police have not arrested him, their sprinting powers being inferior.”

This journalistic game of Chinese Whispers has long since clouded the facts concerning the events of September 1904 and many a Fortean folklorist will happily tell stories of the devilish creature bounding up and down William Henry Street as crowds of onlookers watched. In truth, since Spring Heeled Jack’s heyday of the late 1830s, his name had become analogous with the Bogeyman, especially in areas which he was reputed to have visited such as Everton. Children were warned that if they did not behave they would be carried off by the creature. Therefore, it is not surprising that missiles raining down from a rooftop, thrown by unseen hands should soon lead to at least one individual exclaiming “It’s Spring Heeled Jack!” or something similar. In fact, a Liverpool Echo interview with a Mrs A. Pierpoint from the 19th of May 1967 offers another explanation for Jack’s association with the case. Mrs. Pierpoint was of school age in 1904 and remembered the facts surrounding the case quite clearly. When asked about Spring Heeled Jack she replied

“He was a local man slightly off balance mentally. He had a form of religious mania and he would climb on to rooftops of houses crying out: ‘My wife is the Devil!’ They usually fetched the police or a fire-engine ladder to get him down. As the police closed in on him, he would leap from one house roof to the next. That’s what gave rise to the ‘Spring-Heeled Jack’ rumours.”

Interestingly though, Mrs. Pierpoint was quite emphatic in her interview when questioned about the reality of the haunted house itself.

“The poltergeist which haunted the house in Stitt Street was no myth. That existed right enough, as any Everton resident of those days will confirm. The people who lived in that house were awakened night after night by furniture and other things being thrown about the rooms, with no human hand doing the throwing. It got so well-known that people from all over Liverpool used to go and stand outside and look at the place often enough in fear and trembling. Eventually the tenants gave it up and moved out. The windows and doors of the house were boarded up and it was left to its ghost”.

Certainly, the original account of “various missiles being thrown in a mysterious manner and without any visible agency” does sound altogether more like the modus operandi of a poltergeist rather than the old flame belching, flesh scratching terror of London town. Sadly, Stitt Street no longer exists having been demolished sometime during the 1970s or 80s; perhaps the other residents had grown tired of the nuisance caused by the neighbourhood poltergeist (which does, after all, translate from German as “noisy ghost”) and simply left. The other locations involved in the incidents – William Henry Street, Saint Frances Xavier’s collage and church – are all still very much in existence however. As for Jack himself, he still crops up now and again; most recently in South Herefordshire during the late 1980s when a Mr. Marshall was slapped by a strange, jumping figure that bounded away across open fields cackling after the attackiii. Some one hundred and seventy years since Spring Heeled Jack’s first appearance it seems we are no closer to solving the mystery of whom or what it actually is. The creature’s appeal endures however and, in recent years Jack has made a return to the Penny Dreadful, now reborn as the comic book, in David Hitchcock’s highly acclaimed Springheeled Jack series (see David’s website davehitchcock.blogspot.co.uk for more information). In Hitchcock’s tale, Jack is portrayed as an inhuman, parasitic, insectoid creature but, as far fetched as such ideas might seem, I would remind you that, according to some at least, the real life terror of old London town began his career as a bear!

*Thanks to Mike Dash for all his help with this piece. Mike has written extensively about Spring Heeled Jack and many other peculiar subjects, details of which can be found at www.mikedash.com.