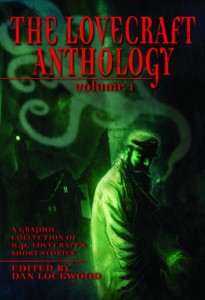 So, Self Made Hero’s The Lovecraft Anthology Vol 1 isn’t actually out yet (you can pre-order from Amazon.co.uk

) but, because we contributed, we received a comp copy a little while ago. And it’s a really, really nice looking, well put together book, featuring Ben Templesmith (cover), Dan Lockwood, Rob Davis, David Hine, Ian Edginton, Mark Stafford, D’Israeli,  Shane Oakley, I.N.J. Culbard, David Hartman, Alice Duke, plus ourselves and Leigh Gallagher. There honestly isn’t a bad story in there, which is partly down to Mr. Lovecraft of course, but also shows how well everyone involved has risen (Cthulhu like) to the challenge  of adapting his work.

There’s going to be a great big launch party for the book as part of the H. P. Lovecraft Reanimated event at The Horse Hospital in London next month, which we are gutted we cannot attend but, if you can get tickets, you should definitley do so.

There are going to be related panels and signings and stuff at most, if not all, of the UK comic cons this year, keep a beady eye on http://www.selfmadehero.com/news for more info as and when.

The Lovecraft Anthology Vol 1 is honestly a book we’re proud to be a part of (and one we’d definitley have bought anyway even if we weren’t in it) and something we really think people are going to be blown away by. Roll on Vol 2.