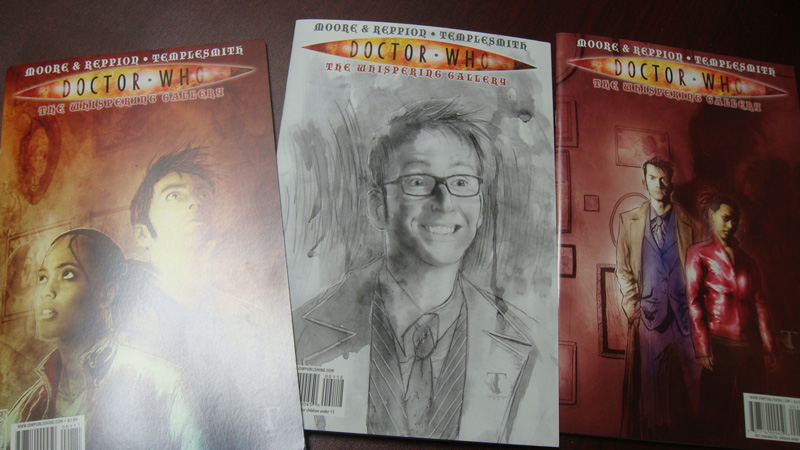 In The Whispering Gallery, the TARDIS lands in a maze-like gallery filled with thousands of talking pictures, and the Doctor and Martha discover they’ve come across a planet where showing emotion has been outlawed. The inhabitants have good reason for their supression, but it wouldn’t be like the Doctor to leave them in fear of truly living.

Married writing team Leah Moore and John Reppion have been fans of “Doctor Who” for nearly as long as they can remember, and pitched IDW Publishing on their story idea for the classic British sci-fi hero after Leah had a dream about a two-page spread one night.

Leah Moore said the couple had a hard time initially thinking up an original storyline. “Everything we could think up had already been done, or was not the right kind of story. We went off to bed one night after brainstorming fruitlessly for hours, and I went to sleep worrying that we’d not be able to think of anything and miss out on writing it altogether.”

After the dream, Leah says she woke up knowing clearing what they would do for Dr. Who, and got the story turned around very quickly after that.

Moore and Reppion became involved in the project after being approached by artist Ben Templesmith, an admirer of their work.

“Ben actually approached Leah via the modern miracle of Twitter and asked her if we’d be interested in pitching for a Dr Who one-shot with him as the artist,” explained Reppion. “Naturally, we were thrilled and said yes immediately. Ben is a fantastic artist and we both really admire his work, so it’s great to be able to work with him on such a brilliant little project.

2 thoughts on “IDW’s Dr. Who- “The Whispering Gallery” due out February 25”