Geoff Holder is a self described “Author, Scriptwriter, Proofreader, Curmudgeonly Old Git”. He’s the writer of Zombies from History, 101 Things to do with a Stone Circle, and Poltergeist Over Scotland among many, many others.

We met Geoff a couple of years back at the very fun and very interesting Manchester Monsters Convention and have been Twitter and email followers/correspondents ever since.  Geoff very kindly nominated us to take part in The Creative Process Blog Tour in which an author answers four questions and then nominates two other authors to do the same.

What are we working on? 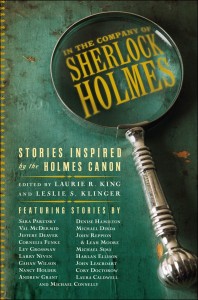 John: Lots of stuff. Some of it at the proofing stage (Black Shuck pages coming in from Steve Yeowell, The Problem of  the Empty Slipper with Chris Doherty and Adam Cadwell for In the Company of Sherlock Holmes

recently signed off), some still being pitched, some comics stuff fully scripted but not yet drawn.

Yesterday I sent off a page-by-page breakdown of a new Megazine series which we should hopefully start scripting in the next week or so.

Leah: I’m currently editing a big exciting project involving us, some two bit author nobody’s heard of called Alan Moore, and some of our favourite writers and artists. We hope to be able to announce properly next week maybe, so watch this space.

I’m also writing some articles for Lifetime magazine on parenting. We have three little boys, two year old twins and a four year old, so life is busy and loud at the moment. not ideal conditions to write in, but ideal fodder for these articles. We have a lot of pitches out there at minute, so we are playing the waiting game on them, and trying to get them in front of the right people. Its hard to keep pushing everything at all times, so we settle for nudging everything forward a bit on a loose ‘when we remember to’ rotation.

How does our work differ from others of its genre?

John: We work in lots of different genres. Comics is a medium, not a genre (as many people will point out quite wearily) and outside of our comics work we both write lots different stuff from Fortean articles to Mum-blogging.

Leah: I think our work is quite different because we love comics as a medium, but we are by no means super fans of most of the industry. Neither of us have ever really obsessed about any particular title or genre, so I think we draw on other sources to fuel our ideas. John is really into folklore and Forteana, which has a big influence, and when I get the time I love fat novels, especially sci-fi. We both like mysteries and crime shows on TV and big fantasy films, so we try and bring things from all of that to our comics, instead of referencing comics that have gone before. I hope the result is better for all of that.

Why do we write what we do? 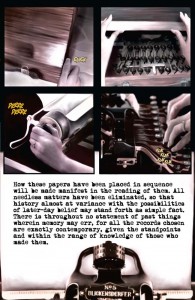 Leah: I think we write for the love of seeing things real and in the flesh when they were once in our heads. The thrill of seeing your work in print, or on screen never leaves you, and the drug like buzz is certainly addictive.

I find the little articles I’ve done raise a lot of discussion and debate on Facebook and Twitter and I find that really satisfying, seeing people talking and chewing stuff over because of my writing.

I’d love to be one of those writers whose mind is overflowing with a waterfall of ideas and all they have to do is stick out a net, but i’ve always found it much harder than that, we have to put stories together quite carefully, and make sure they are good and strong enough to write. This means we are slow as anything, but we get there!

John: We just got back from a week-long family holiday and though it was lovely, it was really nice to get back to writing when we got home. It’s something you end up addicted to, I think.

There are things that crop up again and again – not themes so much as approaches or ways of looking at things. You have to be interested in in what you’re writing, even when it’s something that’s been assigned to you, and I think the ways in which you interest yourself, the angles to use to view topics from, are the things that give a writer a specific voice. It’d weird because there’s a Moore & Reppion voice which is neither of ours; it’s a composite entity we’ve created. We write what we do in comics because we’ve found a way of squishing our two brains into one hypothetical head.

How does our writing process work?

Leah: We work differently now to how we used to by necessity of children and limited free thinking space. We used to collaborate constantly walking and talking and thinking and writing, but now we have very little time so everything is done in frenetic bursts. It seems to still work, but its a slightly more stressful way of working. I think the story part of your brain is still working even when you are wiping up sick and shouting the kids to get off the table, I think you make connections all the time and eventually they work themselves into things. I hope so anyway, or we’ll have to get proper jobs.

John: Comics work used to be done via a lot of democratic discussion and back and forth revision but now we do it in more of a conveyor belt system where we hand things on to each other at different stages. I tend to work things out in my head a lot more thoroughly before I get to actually type anything nowadays  – just because I can do that bit while I’m changing nappies, or pushing a pram, or whatever, as Leah says.

With some of our most recent work it’s been a case of me breaking things down into page by page plot points, then Leah roughing the pages out, then one of us typing up from the roughs, then the other going over the script. We’re still sharing the work out between us but we’re doing it in manageable stages.

And so we pass the baton(s) on to novelist, comic book writer, and occasional short-story-ist C. E. Murphy and to unsettling horror writer supreme Ramsey Campbell.