Back at the beginning of 2012 we were involved in coming up with original mysteries for The Great Detective and The Good Doctor to solve in the 7th Frogwares Sherlock Holmes game Crimes and Punishments.

As it happened we actually had to bow out of the whole thing a little bit before the project was completed because there was the small matter of our twin sons being born to be dealt with. Nevertheless, before they arrived, we’d pitched quite a few ideas (somewhere between twelve and twenty, I believe) and helped to flesh out and develop four or five.

Today, we saw this screenshot on the Frogwares site: 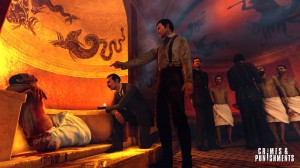 It’s from a case we pitched under the name of “Blood at the Baths”. It’s almost certainly not called that any more. Exciting stuff nonetheless – a first for us to see a story of ours coming to life in a game.