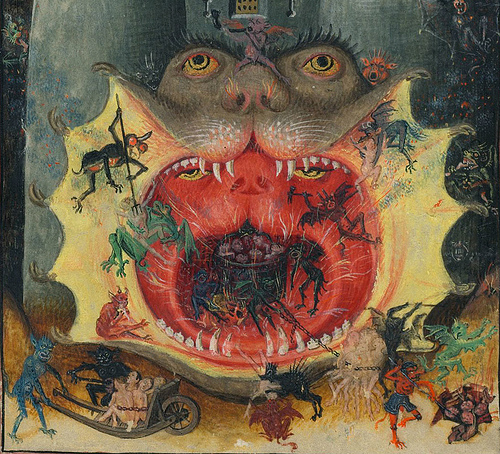 Fresh for #FolkloreThursday, Greg Taylor has posted Maria J. Pérez Cuervo’s Spirits of Place essay “The Palace Built Over a Hellmouth“, about El Escorial on the southern slopes of Mount Abantos, over on the Daily Grail website.

Only a king or a queen has the power to move the capital of their kingdom to their preferred location. For King Philip II of Spain (1527-1598), this place was at the very centre of the Iberian Peninsula, not far from the city of Madrid, in an area called El Escorial on the southern slopes of Mount Abantos. Here he vowed to build his life’s plan: a royal residence that would also be a pantheon, a monastery, a library, a museum and a centre of studies. To bring it to life, he hired a group of architects, experienced masons and theologists, who evaluated the terrain positively but, given the monarch’s interest in esotericism and alchemy, probably warned him of an ancient legend: that the Devil himself had lived in a cave at the foot of the mountain, after he was expelled from Heaven and before he opened up seven doors to enter his new abode in the Underworld. The location of one of these doors was El Escorial.

Read the rest at www.dailygrail.com