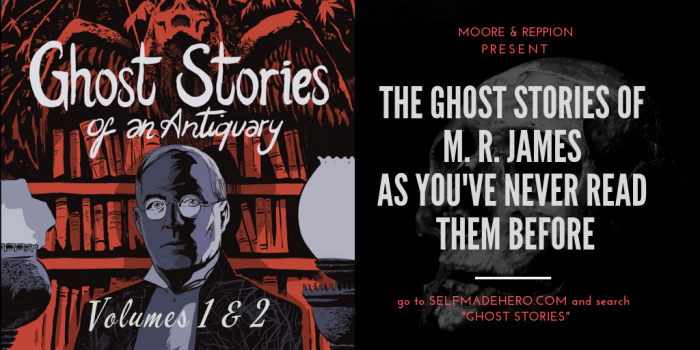 Ghost stories and Christmas are so tightly bound together we should perhaps think of them as siblings. They might not seem all that alike for, where one is round and jolly – all marzipan and mistletoe, the other is spindle-thin, papery, flapping and scratching at the window. Yet both come from the same place; they are different ways to fend off the darkness, and nobody knew that better than M.R. James.

When we think of “a ghost story”, we perhaps think of Wilkie Collins, or The Woman in Black. Imposing architecture full of vengeful spirits. Tragedy. High drama. Great clothes. Gothic.

Gothic fiction was arguably created in 1816 when Lord Byron, Percy Bysshe Shelley, Mary Wolstencraft, and John Pollidari booked the equivalent of an Air B&B on the shores of Lake Geneva, and spent their summer together in a literary version of Dirty Dancing. Instead of the merengue, they challenged each other to write horror stories and brought the world Mary Shelley’s Frankenstein, and John Polidari’s The Vampyre. Gothic was born, and it never went far away. 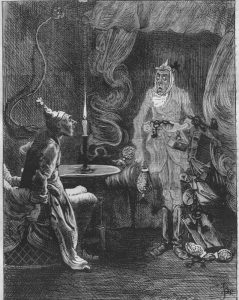 In 1836, a young Charles Dickens wrote the Pickwick papers, in which he includes a story called The Goblins who Stole a Sexton, about an irascible gravedigger who is stolen by goblins and forced to learn the error of his ways. This was clearly an idea that stayed with him, because in 1843, he used it as the skeleton for his most famous work. Written as a deliberate parable, to improve the wicked and increasingly industrialised world he saw about him, A Christmas Carol invented the charitable, chocolate box Victorian Christmas and with it the Christmas Ghost Story as we know it.

What you might not realise is that we owe A Christmas Carol, Frankenstein, Gothic fiction, and all that came after, including Poe, and Lovecraft, and Stoker, and a good proportion of all modern horror we know today, to a single, catastrophic and surprisingly geological event. In 1816, Mount Tambana in Indonesia exploded and the world was plunged into a volcanic winter, a mini ice-age, “The Year Without Summer“. Charles Dickens was only four when it happened, living in debtor’s prison with his family. Crops failed across the whole northern hemisphere, including the potato crop in Ireland, Rice in China, and wheat and maize across America. Europe suffered constant freezing rains and flooding, with nobody able to grow crops or graze animals. In up-state New York, the ground froze solid on June 9th.

That trip to Geneva wasn’t a holiday, it was a retreat from a frozen apocalypse. Without that year of winter, Dickens might not have written his stories of poverty and tragedy and ghostly apparitions, Pollidari wouldn’t have written The Vampyre, or Mary Shelley Frankenstein and a century or so later M. R. James might never have sat down to pen his ghost stories. 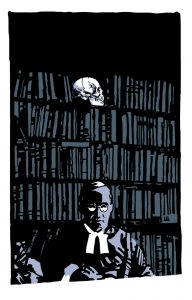 While Montague Rhodes James might not be quite be a household name these days, his ghost stories have long been, and continue to be, a huge influence on everyone from Ramsey Campbell to Guillermo del Toro to Mark Gatiss to Stephen King.

James penned less than thirty ghost stories in his lifetime, many of which were originally written to be read aloud as Christmas Eve entertainment to friends and colleagues at Cambridge College. As a result many of these stories have a very anecdotal and conversational tone; we, the reader, feel we are being told these tales in the strictest confidence, after perhaps a few too many whiskey and sodas. The stories are often set in or near the time they were written, in locations familiar to James and much of his contemporary audience. They are, for the most part, stories of schools and boarding houses, of churches and libraries and railway stations, rather than Gothic crumbling castles or ichor dripping, nighted crypts. James’ ghosts (“the angry dead” as he called them in The Malice of Inanimate Objects) seem especially keen on making themselves known to rational, sceptical non-believers, the least fortunate of whom sometimes do not survive the encounter.

Despite their age (the oldest having been published more than a century ago) these stories remain very much a modern take on the ghost story; exceptionally well crafted Friend of a Friend anecdotes which blur the lines between the commonplace and the supernatural. These are things that could happen to you, dear reader, if you are not careful. 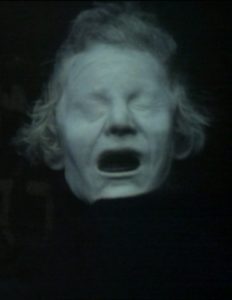 James was a very visual writer; there are scenes in each of his stories which read so much like panel directions that, when we adapted the eight stories from his first collection Ghost Stories of an Antiquary into two comics volumes, we ended up using them as such. Dropping his own descriptions direct into our scripts. Yet, while James knew exactly what he wanted the reader to “see”, he was also knew exactly what he didn’t want them to. He was incredibly adept at providing fleeting glimpses – the corner of the eye stuff we are so used to in modern horror – creating intrigue, suspense, and dread. There is a temptation when adapting prose into a visual medium to try to add to what was there before – to fill in the gaps with some impressive imagery – but we felt strongly that this would be a mistake in the case of James’ work.

We are, of course, very much aware that we are not the first people to adapt James’ work, nor to see the potential for transposition in his very visual, and at times wholly unpleasantly tactile, words.

The BBC’s A Ghost Story for Christmas series began officially in 1971 with Lawrence Gordon Clarke’s adaptation of The Stalls of Barchester Cathedral. It ran for eight instalments with a new 50 minute film broadcast somewhere between Christmas Eve and New Year’s each year. Three year’s before Barchester however, Johnathan Miller adapted James’ story Oh Whistle and I’ll Come to you, My Lad as part of the BBC’s Omnibus series. Filmed in black and white, and with an incredible soundtrack, Miller’s version of the story did alter many aspects of the original, most notably omitting much of James’ dialogue and narration, but it retained James’ intent; his pacing, and his horror. The success of Whistle was what led to the Ghost Stories series being commissioned.

Of the nine original BBC Ghost Stories, six were M. R. James tales, and all six of those were directed by Lawrence Gordon Clarke. Clarke’s final Ghost Story for Christmas was also the first non-Jamesian one: Charles Dickens’ The Signalman. 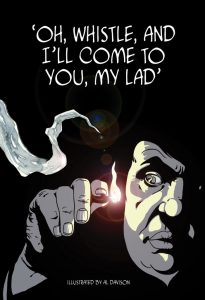 If A Christmas Carol looked back to Dickens’ childhood, then The Signalman is very much a story of his own time. The two main characters are stood up against a backdrop of the mighty monster that was the railways, and its parasitic twin, the Telegraph. This story deals not with the fear of winter, but the uncertainty of change, and the unstoppable march of progress. If messages can be sent down wires then why not other things? If the network links the whole country, then doesn’t it almost become an entity of its own? What place does the ordinary working man have in that world? What happens in the shadows when he is sat in that little hut, pulling the levers, and waving the flags.

Thanks to the BBC series, the ghosts of Whistle and the Signalman are embedded in British culture. People far too young to have seen the films the first time around, or perhaps just old enough to have seen them earlier than they should, have the images of those white-faced spectres burned into their minds.

Our goal with our own adaptations is not just to offer existing fans of M. R. James a new way of reading and enjoying some of their favourite tales, but also to expose his works to a new audience. The eight incredibly talented artists in the two books bring something new and exciting to each and every tale. English ghost stories – tales of witches, demons, haunted paintings, cursed objects, and ill advised magical dabblings. Stories ideal for the reading in the bleak, black midwinter. Stories which thrill us by hinting at what we all know to be true, just as our ancestors did long ago: that we are not quite so safe as we imagine. We lock our doors, we bolt our windows, we curl ourselves up but as James himself wrote “such precautions avail little against the angry dead”.