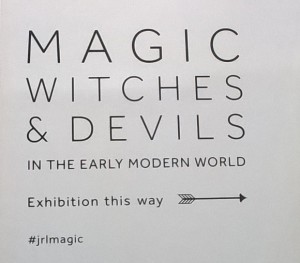 In the recent half term holiday I found myself looking after our nearly-four-year-old twins while our eldest went to the Safari Park. I was a little bit stuck for what to do because there are no (or very few) Stay & Plays/Playgroups open in school holidays. The previous day we’d been to Liverpool Central Library where, for the duration of the half term, there were daily kid friendly things. We (myself and all three kids) had seen a conjurer whose act, if I’m perfectly honest, failed to hold the attention of many of the forty or so kids  assembled there, mine included. Maybe it was this that finally jogged my memory of something I’d been meaning to do since I first read about it.

I’d received an email some weeks earlier via A Ghostly Company which mentioned that, from the 21st of January 2016, the John Rylands Library in Manchester would be displaying some  magical texts and artefacts in an exhibition entitled Magic, Witches & Devils in the Early Modern World. That seems like the kind of thing two nearly-four-year-old boys might enjoy, right?

Read the rest on DailyGrail.com