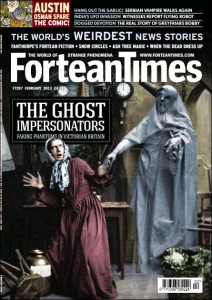 I have a little Forum piece about some of the British folklore surrounding Ash trees in the February issue of Fortean Times.

Ashes were once believed to be a magnet for lightning strikes – probably because of their tendency to split as they grow older, taking on the appearance of having been struck.“Avoid an ash, It counts the flash”, runs one old rhyme. Electrocution hazard aside, the ash’s status as Lightning Tree was generally considered to make it powerful and magical tree.