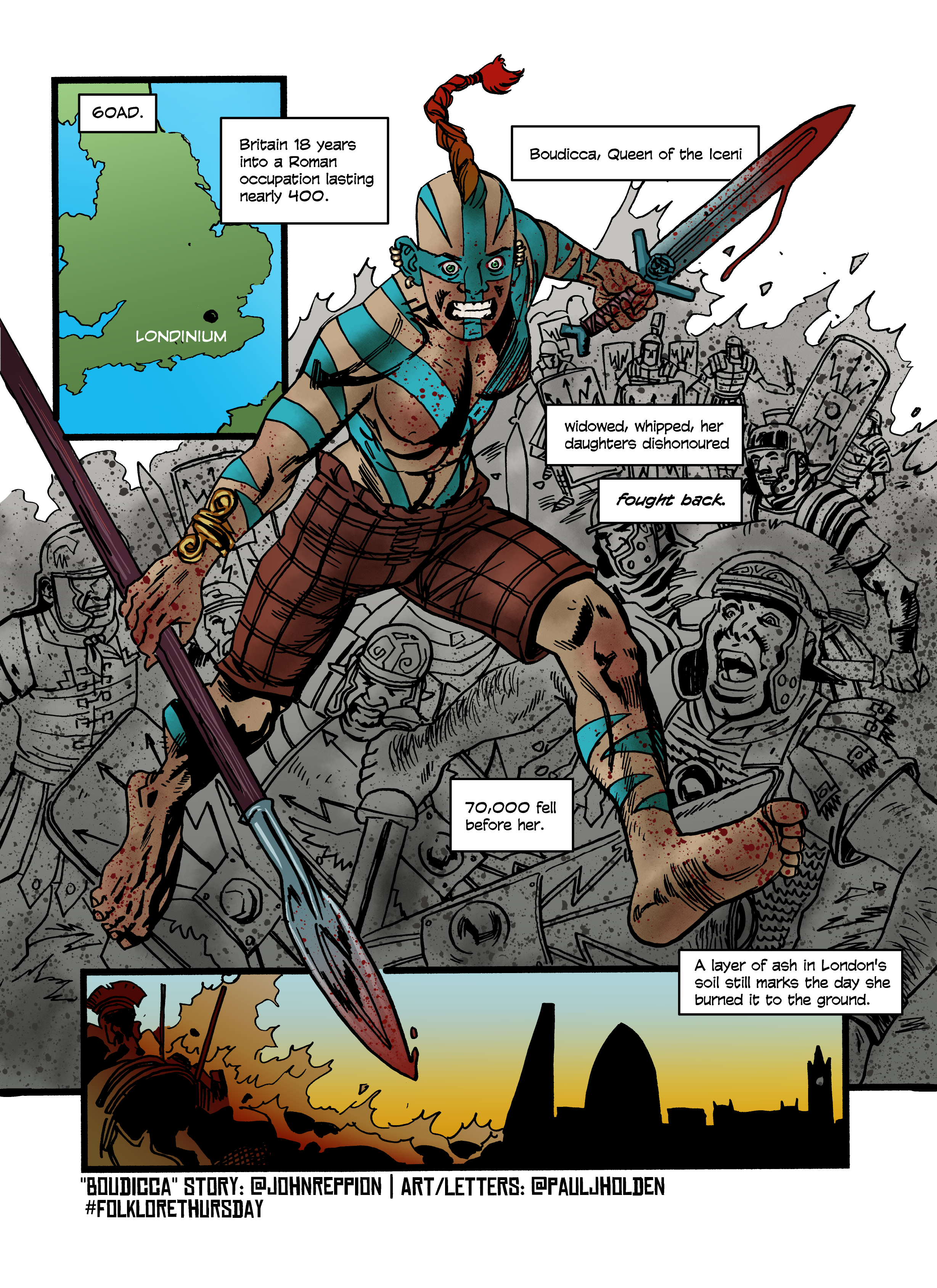 I used to do a bit of writing for the History (UK) TV channel website, and one of the things I wrote a lot about was the rise and fall of the Roman Empire. Most of the articles I wrote are no longer on their site, including the one below about Boudicca. Given that she is the subject of mine and P J Holden's #FolkloreThursday Twitter comic today, I thought it would be good to dig the piece out and post it here.

Little is known of the early life of the woman we now know as Boudicca. It is believed that she was born into a noble family in what is now Eastern England some time around 25 AD. Around the age of twenty Boudicca married Prasutagus who later became the King of the Iceni tribe, who lived in what is Norfolk today. The Iceni had been one of only six tribes who had allied themselves with Rome when Gaius Julius Caesar made the first (and ultimately unsuccessful) attempts at conquering Britannia in 55 and 54 BC. In 43 AD, under the fourth Emperor, Claudius, what was to prove the actual Roman invasion of Britain began. When the Romans arrived, although some of their neighbours went to war against them, the Iceni did not actively resist the occupation, ultimately believing they could coexist with, and indeed benefit from the Empire.

Living in relative peace then, Boudicca and Prasutagus had two daughters and although Rome continued to make further gains, and grow ever more tyrannical, all was well for the Iceni up until the king's death in 59 AD. Prasutagus had left instructions that his wife and daughters inherit his kingdom after his demise but this was not the Roman way. Roman procurator, Decianus Catus, arrived at the Iceni court with his staff and a military guard. He proceeded to take inventory of the estate which now, so far as he was concerned, belonged to Rome. When Boudicca objected, Catus had her publicly flogged, the princesses raped.

In 60 AD while the Roman governor Gaius Suetonius Paullinus was occupied with a campaign on the island of Mona (modern Anglesey) in North Wales, Boudicca led her own force comprised of the Iceni, their neighbours the Trinovantes, and others in a bloody rebellion. Camulodunum (Colchester as it is today) - the Roman Capital of Britain at the time – was the first place they attacked. The Roman veterans who had been settled there mistreated the locals and a temple to the invader, Emperor Claudius, had been erected there at local expense, making the city a focus for resentment. Boudicca and her army destroyed both the temple and the city itself – burning its buildings, killing everyone within.
The Romans sent Legion IX Hispania (consisting of 4,000 well trained men), under command of Quintus Petillius Cerialis, to quash the rebellion but Boudicca's forces ambushed them and only the commander himself and some of his cavalry escaped.

The seemingly unstoppable rebel army next turned its wrath against the relatively new settlement of Londinium (London). Gaius Suetonius Paullinus, having heard of the rebellion, had already made his way there from Wales but concluded that the place was impossible to defend from such an army as that of Boudicca. The governor ordered an evacuation but many stayed. All who do so were killed when the rebel army arrived and destroyed Londinum utterly. Archaeology shows a thick red layer of burnt debris covering coins and pottery dating before AD 60 within the bounds of Roman Londinium, proving that the place was burned to the ground. Next they attacked Verulamium (near Saint Albans) which was likewise destroyed and burned to the ground.

In all some 75,000 Romans and Roman allies are thought to have been killed by Boudicca's forces. The Roman historian Publius Cornelius Tacitus recorded that the Britons took no prisoners whatsoever – they killed everyone and showed no mercy, just as the Romans had shown none to Boudicca and her daughters.

While the rebels were occupied with the destruction of Verulamium however, governor Paullinus gathered a force of 10,000 Roman soldiers. In 61 AD he took a stand at an unidentified location (probably in the West Midlands somewhere along the Roman road now known as Watling Street) and went head to head with the rebel army which was supposed to be some 200,000 strong by this time. Boudica commanded her troops from her chariot, her daughters beside her. She is recorded to have made a speech saying that their cause was just, and the deities were on their side; the one legion that had dared to face them had been destroyed. She, a woman, was resolved to win or die; if the men wanted to live in slavery, that was their choice.

Despite being vastly outnumbered, through the use of superior weaponry and military tactics (including a well chosen battleground), the Romans defeated the rebel army that day. Boudicca is said to have poisoned herself rather than face capture or death at the hands of Rome.