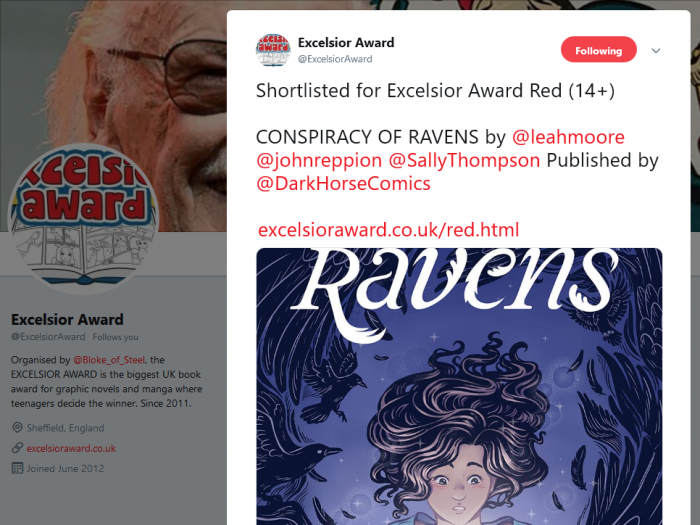 We are very pleased and proud to say that Conspiracy of Ravens has been shortlisted for the 2019 Excelsior Award in the Red (age 14+) category.

If  you haven’t heard of the Excelsior Award before, here’s a bit more info from their About page:

In January 2011, I organised and ran a city-wide book award project called The Stan Lee Excelsior Award. Initially intended as a graphic novel and manga award just for schools in Sheffield (to complement the long-running Sheffield Children’s Book Award), word of this unique project quickly spread and several other schools from across the UK asked if they could take part too. 17 schools eventually participated and got hundreds of children involved in the ‘Reading & Rating’ process. 842 Rating Forms were completed and returned. In 2012, the popularity of this project exploded on a national level. 77 schools took part and returned a phenomenal 2307 Rating Forms. This equates to each shortlisted book being read at least 250 times by the UK’s school children! Since then, these figures have more than doubled and today the Excelsior Award attracts over 200 schools from all over the UK and beyond!

It’s a fantastic idea to get schoolkids reading Graphic Novels, and to get them to vote for their favourites.

If you work in a school, do work for a school, or have kids in school in the UK then we’d definitely encourage you to get involved if you can.