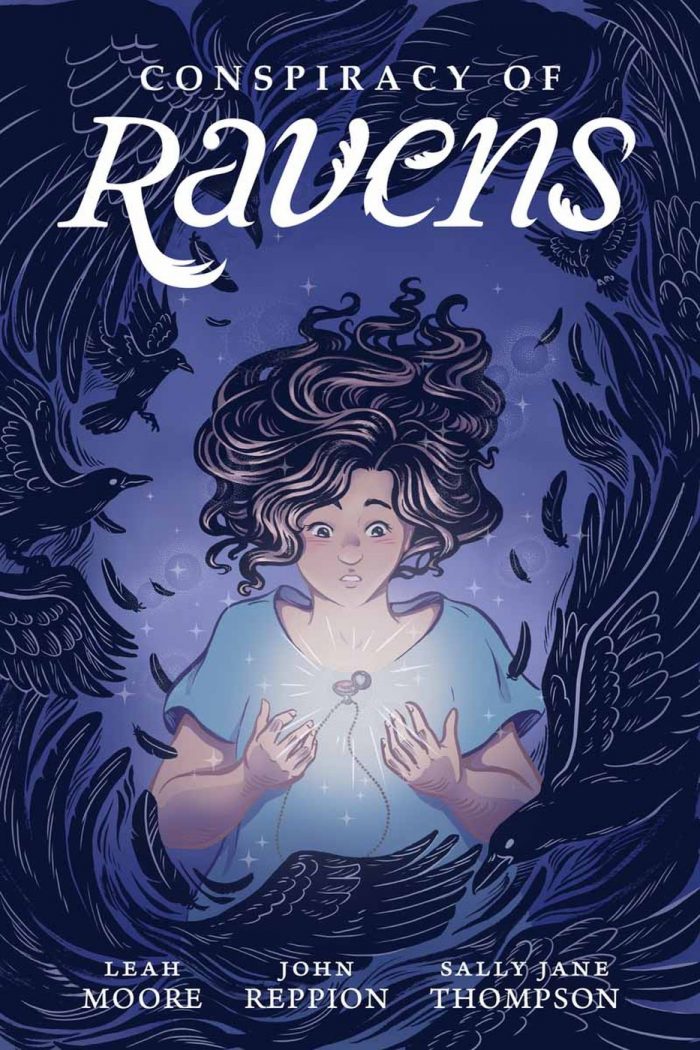 From Leah Moore and John Reppion, the writers of Damsels, The Trial of Sherlock Holmes, and Ghost Stories of an Antiquary comes an original graphic novel perfect for tween, teen, and adult fans alike! Conspiracy of Ravens joins Moore and Reppion with interior and cover artist Sally Jane Thompson (Atomic Sheep, Now and Then, The Ruby Equation) to weave a tale of magic, family secrets, and a mysterious legacy.

Anne is a teen schoolgirl who thought she was just like everyone else. But when she unexpectedly inherits her long-lost aunt’s crumbling English mansion and a strange ancient locket, she unearths a family secret that leads to the discovery of her mysterious powers. She picks up the mantle of her family’s magical legacy, but soon learns that she isn’t the only one whose powers are awakening, and not everyone wants to use their powers for good…

Conspiracy of Ravens HC goes on sale October 3, 2018 and is available for pre-order at Amazon, Barnes & Noble, and your local comic shop.

Conspiracy of Ravens is a project which began life back in August 2012. Sally Jane Thompson was running a little art giveaway via her Twitter account and my name got pulled out of the hat to receive a free sketch. We exchanged emails, she asked what kind of thing I liked, and I said something like “Victorian stuff and corvids”. I do like Victorian stuff, and I do like corvids, but I’m not sure exactly what was going on in my head at the time for those to be the first two things to come to mind. Anyway, on the 20th of August 2012, the postman delivered the sketch (which was actually a fully finished piece of art).

This absolutely fantastic sketch arrived in the post today. Thank you so much @sallythompson 🙂 Amazing work. pic.twitter.com/UN4jQnil

The image was so good, so strong, so much a picture of something we could already imagine existing, that it immediately started giving us ideas.

@SallyThompson so she’s “something Ravenhall” or “Ravencroft” or… ? Collective noun for Ravens is an Unkindness or a Conspiracy…

@johnreppion An unkindness is one of my favourite collective nouns, it sounds like they fly around insulting people! But A Conspiracy of…

and that was the start of that.