I missed a week.

Or, more accurately, we lost a week because of all the truly dreadful, horrible, stuff that’s going on in the UK right now.

Dredd’s 21st century dystopia is starting to look like a nicer place to live than our own, but enough of that.

BLACK SHUCK // SINS OF THE FATHER (part three and four)
Scandinavia, 815 AD. When the Anglo-Saxon warrior known as BLACK SHUCK washed up at the court of King Ivar, it was discovered he was the monarch’s bastard son, sired during a Viking raid on the town of Dunwich. Shuck successfully aided Ivar in his fight against the monstrous Jötunn, and became king himself. But his bestial curse has been passed on to his unborn sons, and his family will perish unless he seeks help…

Written by us, with pencils and inks by Steve Yeowell, colours by Chris Blythe, and letters by letters by Ellie De Ville.

Track four on the Black Shuck 2 soundtrack: Hellhound on my Trail by Robert Johnson

Rather than giving you a double dose of our own process and script stuff (probably too much excitement for anyone to take), I thought I’d link out to some art process instead. You probably noticed that our very own Storm Warning artist Tom Foster created the Dredd cover for Prog 1986. Well, Tom went through the making of his very first 2K cover over on the 2000 AD site for their Covers Uncovered feature. 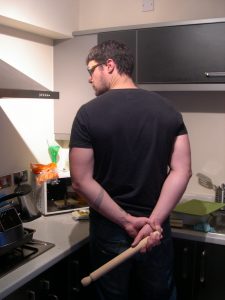 So then, on to this week’s Prog.

No roughs this week because they’re really not work scanning in, I must have been working fast because to call them stick figures would be an exaggeration. I can tell what they are but there’s no need for you to see them, trust me. I have a feeling it’s going to be the same for the following progs too.

Script for pages one and two:

This is a six panel page with three tiers and two panel on each.

This panel is a shot of a deer in a lovely lush green forest doing that special “looking round suddenly in shock” thing deer do so well. It’s part of a herd of deer but I think you can only see the one here as we’re close in. One caption.

Cap: The Black Dog-things of English folklore are not always beasts of ill omen.

This is a shot from low down amongst the bracken and the ivy on the forest floor. We are in pursuit of the deer and the rest of its small herd who are leaping and bounding away from us. In the central background we can see, amongst the trees, a bed with Queen Fraydis sitting up in it. She’s very small here but she’s there. The deer are running towards her. There is one caption.

Cap: Some tales tell of their kindness, their protective nature.

Here we are closer to the Queen and the bed, still at the same low angle. The deer are leaping over and around her bead to escape us but the Queen has caught hold of one deer and is pulling it down on to her lap with a serene smile. There is one caption.

Cap: It was said that mothers would allow their children to play unsupervised on the Quantock Hills in Somerset.

Here we are closer still so that the bed is the main thing in the panel (although it and we are still in the forest). It’s as if we’ve leapt up onto the covers and are sitting at the foot of the bed. Two little black, hairy Shuck pups have jumped up onto the bed ahead of us and are sinking their teeth into the deer as their smiling mother holding it in place for them. She looks every inch the proud, loving mother. There is one caption.

Cap: They believed that their local beast, the Gurt Dog, would allow no harm to come to them.

This is a shot of the Queen’s face in the real world as she starts awake. She is not exactly shocked but maybe a bit worried. There is one caption.

Cap: Some scholars have connected this kinship with children with one of the many alleged origins of such creatures.

Here we’ve pulled back so we can see the Queen sitting up in her bed in the real world. She is alone – no sign of her husband. She rests one hand on her swollen belly and looks down at it. One caption.

Cap: That being that the Black Dogs were themselves the spirits of unbaptised infants.

This is a five panel page with three tiers; two on the top, one in the middle, two on the bottom.

This is the smaller panel on the tier here we’re in close on the face of the farmer who we saw at the end of the previous episode. His face is contorted with outrage as he tells his tale. There is one time/place caption and two balloons from the farmer.

Farmer: …demon-beast as big as a bear. Every one of my cows torn to shreds.

Farmer: the thing came straight for me but when I opened my eyes it had vanished like smoke.

Here we’ve pulled out and we can see that we’re at some kind of meeting in a village square (or the 9th century equivalent thereof) with lots of people standing round all talking animatedly. Someone else in the group is giving their opinion now, while not everyone appears to be listening – some are muttering conspiratorially to each other. Those older women especially seem to be viewing the whole thing as pretty dire. The person speaking has two balloons, one of the old women has one.

Balloon: There was that boy found dead weeks back. His horse ripped apart.

Balloon: And on his chest they say they found a paw-mark burned into the flesh!

this tier wide panel shows the whole of the assembled crowd. Some seem shocked by the old woman’s words, other are nodding their agreement. Somewhere at the edge of the group a man dressed in black with an angular face, clean-shaven except for large black sideburns is regarding the whole thing with something like amusement, leaning on some item of street furniture or a barrel or something. He is a traveller, not from round these parts. The old woman has centre stage now and has three balloons.

Old woman: There are a few here old enough to remember the last time such a devil was abroad.

Old woman: And the damage the thing done, not just to cows and the like but people too.

Old woman: It’ll grow stronger with every kill, and soon no-one will be safe.

Here we have a view of the section of the crowd closest to the farmer who looks really worried. Behind him we can see the man in black stepping forward toward the crowd. The farmer has one balloon, one of the other people nearby has one, and the man in black has one.

Balloon: It’s them Dene! Brought the beast with ’em on their ships!

This is a close-up of the man in black. He look archly interested as he asks his question. One balloon.

Man in black: Which Dene would these be?

Steve’s inks for pages one and two: 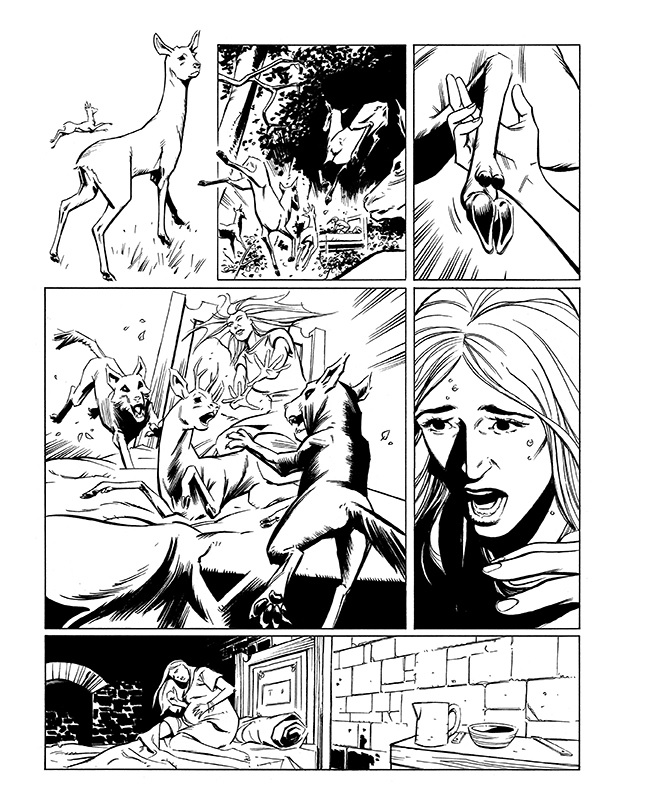 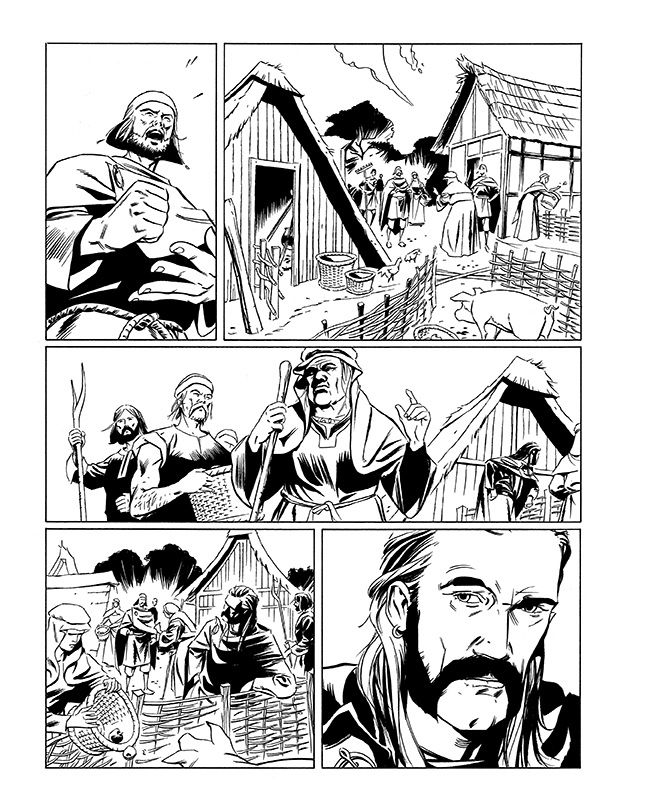 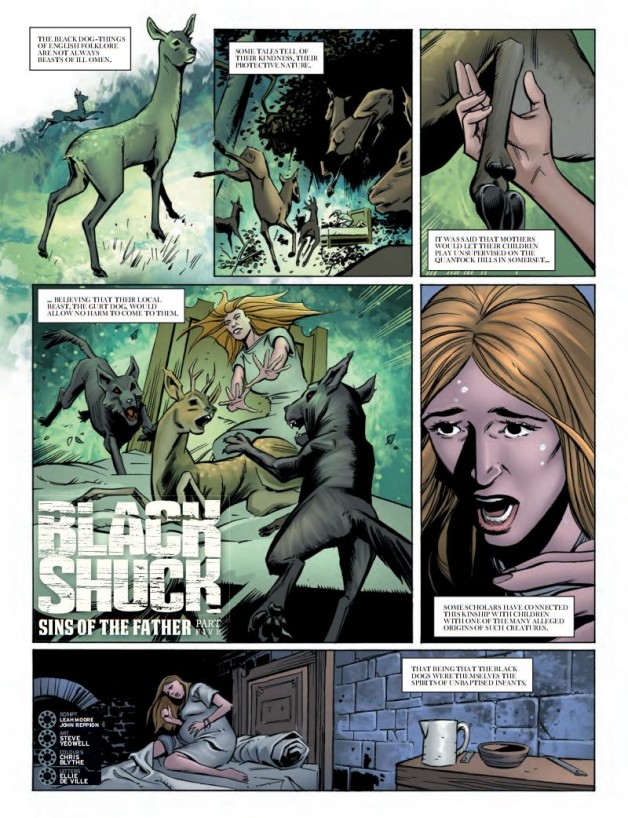 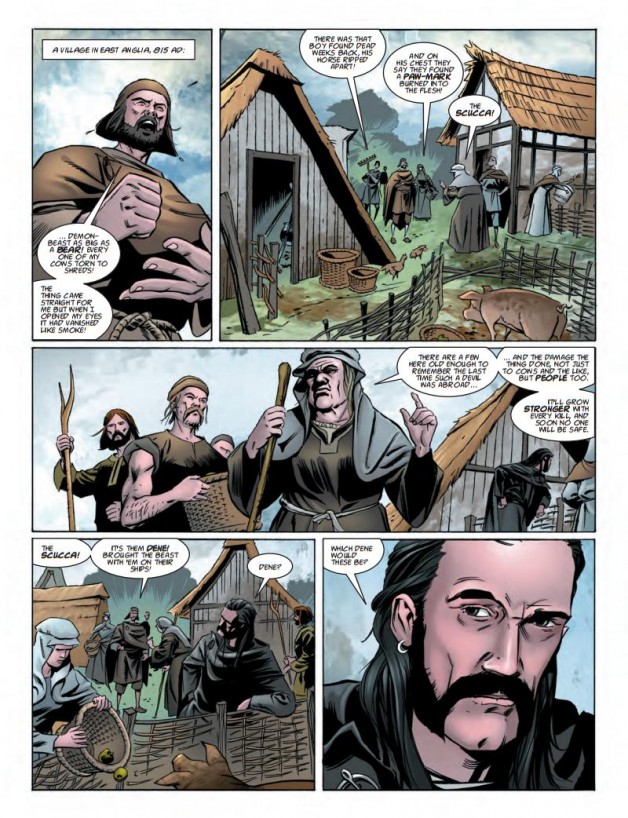 After King Eadwald’s Oh Whistle and I’ll Come to You style dream intro in the previous Prog, this week’s instalment begins with what is pretty clearly an homage to one of the finest films ever made, An American Werewolf in London. It’s a sort of merging of two of David’s dreams from the film, one where he’s hunting deer in the forest (which I can’t find online) and this one:

Except, of course, the horror isn’t that Queen Freydis may be a monster herself, rather that she might be mother to a pair of monsters.

The Gurt Dog (“Great Dog”), mentioned in page one, seems to be an interesting example of a benevolent Black Dog in English folklore, leading the lost homeward.

A kind and gentle cottager
There once did live, ’tis said
Near Bicknoller in Somerset
Not far from Quantoxhead.
He chose to climb the Quantock Hills
One dreary winter’s day;
Through Weacombe and towards the top
He went his cheerful way.
Good countryfolk of Somerset, whoever ye may be,
The Gurt Black Dog up over, he’ll take care of ye.

This is the first verse of a 21st century choral work entitled The Gurt Black Dog of Somerset, composed by Oliver Barton, with lyrics by Martin Forre (and here is a Malaysian choir performing the song).

I can’t find anything about the Gurt Dog in my usual go-to folklore books (Alexander’s Companion, Westwood & Simpson’s Lore of the Land, the Bord’s Mysterious Britain, etc) and what there is online seems fairly sparse but I’ll ask the Folklore Thursday crew if anyone has a bit more tomorrow. What I’ve read thus far is summed up on Wikipedia:

The Gurt Dog (“Great Dog”) of Somerset is an example of a benevolent dog. It was said that mothers would allow their children to play unsupervised on the Quantock Hills because they believed that the Gurt Dog would protect them. It would also accompany lone travellers in the area, acting as a protector and guide.

The supernatural protector is a lovely idea; kids not warned off an area because of a supposed ghost or monster, but rather told to feel safe and secure because of the watchful presence of the Black Dog. There’s something very Hookland about that.