The final episode of Black Shuck is out today in Prog 1899.  Written by us, with pencils and inks by Steve Yeowell, colours by Chris Blythe, and letters by Simon Bowland.

BLACK SHUCK // PART NINE
Scandinavia, 813 AD. A Viking raid on the settlement of Dunwich in East Anglia led to the warrior
known as BLACK SHUCK being captured. But he has washed up at the court of King Ivar the lone
survivor – what terrible calamity befell the others during the sea crossing? Now Shuck has been
dragged into the war between Ivar’s people and the monstrous Jötnar, thanks to a curse…

Order or download 2000 AD 1899 right now. If you have already read it, please join us for some spolierish extras after the cut.

Well, here we are at the end of Black Shuck; never intended to be mind blowing, or mould breaking, it was always written by us as a fun, monster-bashing, Heavy Metal type of affair. Thanks to those of you who took it in the spirit it was intended for taking the the time to let us and others know how much you enjoyed it. We sincerely hope you were thrilled and entertained by this final Dragur-smashing episode. I ALL HAIL THE KING! ALL HAIL BLACK SHUCK!

I’m going to have to skip the roughs this time because I’m having scanner troubles. Sorry.

Page One of the script:

This is a five panel page with three tiers; two on the top, one in the middle, two on the bottom.

This is a small shot looking down on the Vikings who we saw last time in the barrow with the Dragur. We’re viewing things from the Dragur’s POV and the Vikings are looking up at us/the Dragur, weapons at the ready. One Viking (not Ulf) has two balloons.

Viking: But if he has returned to his body, how are we to destroy it?

This larger panel shows the Dragur backhanding the troop of Vikings viciously, sending them sprawling in all directions. In the foreground we can see Shuck’s body near the entrance to the barrow (outside which we can now see daylight!), with arrows sticking out of it and the hammer on his back. The Dragur is roaring with laughter and has two balloons, one FX from the blow.

Dragur: You shall all die here!

This tier-wide panel shows Ulf hitting the earthen floor of the barrow heavily. The Dragur’s foot is already descending to stamp him into the earth. Ulf has one balloon.

Here we’re looking down as the Dragur’s foot stamps heavily on the ground. Ulf is rolling quickly sideways out of its way, just dodging it in time. He has one balloon and there is one FX from the stamp.

Ulf: He is flesh now.

Here we are low down at ground level. Ulf, still lying on the ground, has his teeth gritted and is rolling back over suddenly to drive his sword deep into the ankle of the Dragur. He has one balloon and there is one FX.

Ulf: He can be killed!

Steve’s inks for Page One: 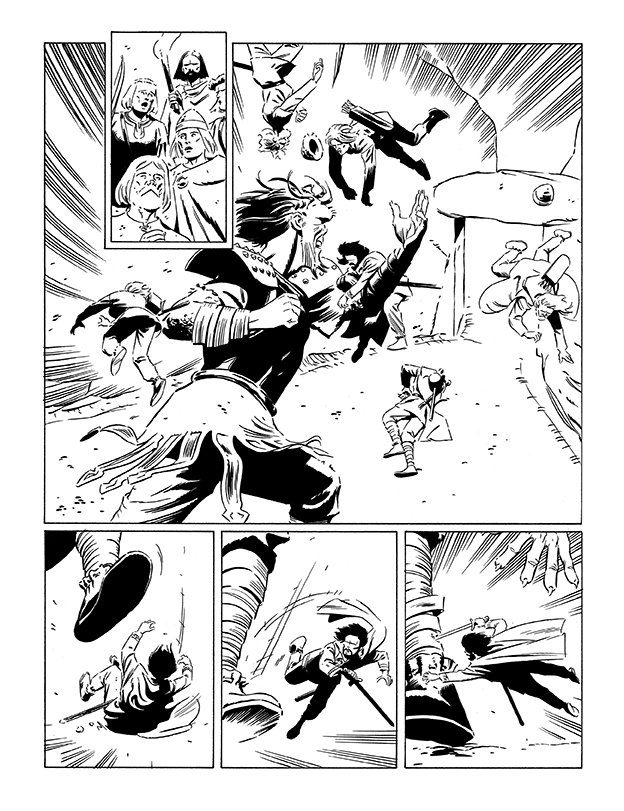 Slight layout change from Steve as per usual giving us a bigger Panel Two. 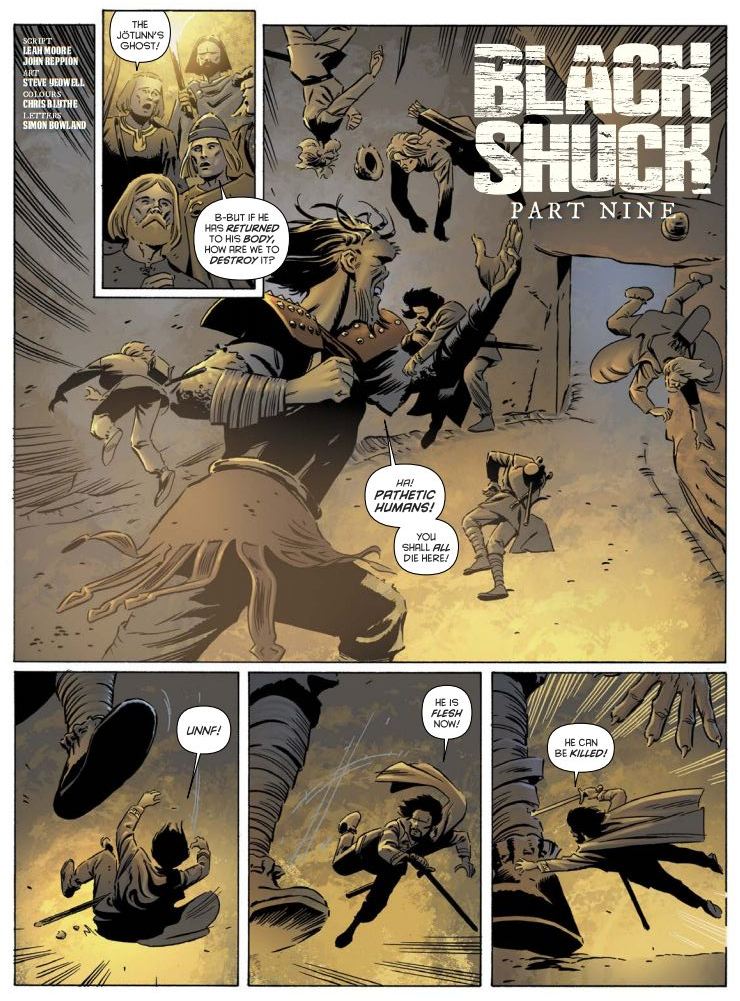 FX changes/removals but all looks a reads lovely. Well done team Shuck. Massive thanks to Steve Yeowell,  Chris Blythe, and Simon Bowland for all their awesome work on the series.

And that’s it. All done.

We’ll be back in the 2K universe with a Megazine series called Storm Warning some time in early 2015. Our artist on the series is Tom Foster and we’re very excited for you to see it.